Getting Started with PGI on AWS

PGI Community Edition compilers and tools for Linux/x86-64 are available as an Amazon Machine Image (AMI) on the AWS Marketplace, providing a low-cost option for those interested in doing GPU-accelerated computing using Amazon's extensive cloud computing resources. For as little as $3 per hour, you can create your own personal virtualized NVIDIA Volta V100 GPU-enabled system on Amazon's cloud. Just upload your application's source code, build it using the PGI compilers, and run it. This article guides you through the steps necessary to build and run an application using PGI compilers, and demonstrates how GPU-accelerated computing can be cost-effective on Amazon's cloud infrastructure.

Understanding Amazon's terminology is key to learning and effectively using Amazon Web Services' cloud computing infrastructure. It is worthwhile to take a few moments to define a few of these terms, as they are used extensively throughout the remainder of this article:

Signing in to AWS

To start, go to the Amazon Web Services page and click on the orange box in the upper right corner of the page. If you do not already have an AWS account, the text in the box will say Create an AWS Account. Click on this box and proceed through the steps as prompted to create your account. (Alternately, you can use the Create an AWS Account page.) You will need to provide some personal information, including a credit card. Amazon prorates the hourly charges of EC2 resources by the minute, so you only pay for what you use.

Note that new accounts include "free tier" access for 12 months; though GPU-accelerated computing is not included in the free tier as of this writing. Amazon also offers grants to subsidize usage of EC2 compute resources to students, educators and researchers for approved projects.

With your AWS account, you should sign in to the AWS console. Once you enter your credentials and click on the blue Sign In button, you will be taken to the AWS Console screen, which should resemble Figure 2 below:

Select the EC2 service from the main AWS console by clicking on All Services then EC2 as shown in Figure 2 above. Note that on future visits to the AWS console, a link to EC2 will also appear under the list of Recently visited services.

he EC2 dashboard should resemble Figure 3 below:

From here, click on the blue Launch Instance button to create a new instance as highlighted by the red box in Figure 3. You will next complete a series of steps to configure and bring online your AWS EC2 instance:

Logging into the Instance

The PGI AMI comes with a user account named 'ubuntu' which has full sudo privileges, so you can create an alternate account for yourself using your preferred username.

If you are using the PuTTY client on Windows, you need to use the PuTTYgen tool, available as part of the complete PuTTY installation package, to convert your key to a .ppk file that PuTTY can use.

When you log in to your instance successfully, you should see a banner message and a prompt similar to the following:

If you see a message like *** System restart required ***, the underlying Ubuntu Linux operating system has automatically downloaded an important security update, and the system needs to be rebooted in order to apply it. You should issue the following command to reboot your instance:

Then wait a few moments, and log back in again.

Building and Running an Application on the Instance

This section guides you through building and running CloverLeaf, which is "a hydrodynamics mini-app to solve the compressible Euler equations in 2D, using an explicit, second-order method." Obtain the CloverLeaf source code by issuing the following command:

Once this command finishes, you should see a new directory named CloverLeaf.

First, log into the c5.xlarge instance you created above, and then build the serial version of CloverLeaf. This version runs on only one CPU core, and serves to provide a baseline time for performance of the application:

Now, you should be able to run the serial version of CloverLeaf as follows:

The serial version takes about three and one-half hours to complete. You should see a series of time steps printed to the screen, culminating in the final step:

You will need to change the instance type for subsequent experiments. To do this, stop your instance using the steps in Shutting Down Your Instance at the end of this article. 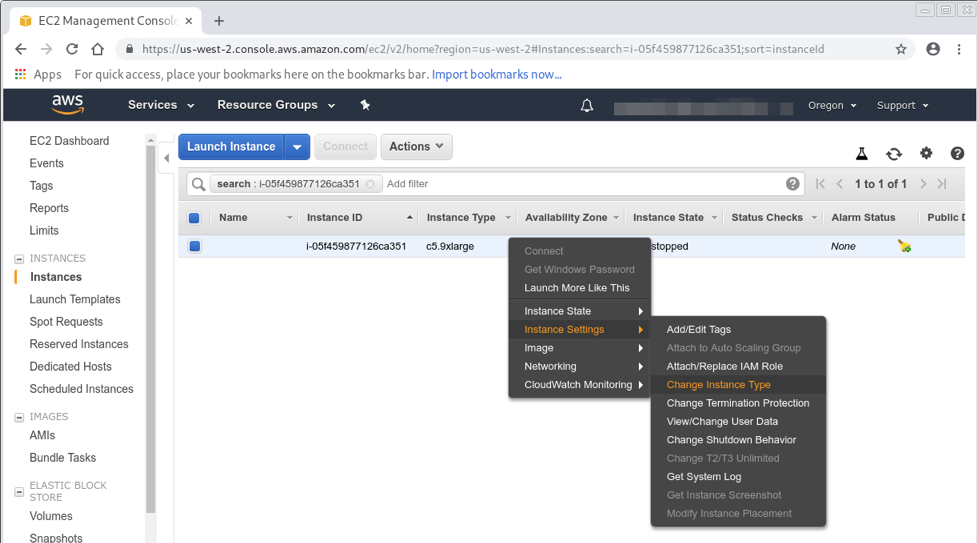 Building and Running Parallel Applications on the Instance

Next, try building the OpenMP version of CloverLeaf. For this experiment, stop the instance and change the instance type to c5.9xlarge as described above. This instance type provides 36 virtualized CPU cores at a rate of $1.53 per hour, which should deliver a substantial speedup over the serial version.

Start the instance and log into it as before. Then change into the top-level CloverLeaf directory and issue the following command:

Once the build completes, you should change to the CloverLeaf_OpenMP subdirectory, and copy the same clover_bm32.in input file as described previously:

You can now the OpenMP version of CloverLeaf as follows:

As you can see, the OpenMP version is a big win over the serial version, requiring less time to complete at roughly the same cost.

You can also build a parallel version of CloverLeaf using MPI. The PGI AMI includes a build of Open MPI that is bundled with the PGI compilers. For this experiment, we continue using the c5.9xlarge instance type from the previous section. Change back to the top-level CloverLeaf directory, and issue the following command:

You can now run the MPI version of CloverLeaf as follows:

The MPI version of CloverLeaf seems to be a bit faster than the OpenMP version:

In this case, the MPI version is slightly faster than the OpenMP version, at a slightly lower cost.

It is also possible to build a parallel version of CloverLeaf that runs on multiple host CPU cores using OpenACC directives. This is potentially useful for testing applications with OpenACC when a GPU is not available on the system, or as a first step toward porting a given application to run on GPUs.

Before you can build the OpenACC version of CloverLeaf, you need to issue a couple of commands to fix a couple of minor build issues with this version. Change back to the top-level CloverLeaf directory and issue the following commands:

Now invoke the build as follows:

Once the build completes, you should change to the CloverLeaf_OpenACC subdirectory, and copy the same clover_bm32.in input file as described previously:

You can now run the OpenACC version of CloverLeaf on multiple host CPU cores as follows:

CloverLeaf should complete in around the same amount of time as the MPI version in the previous section:

The total cost of running the OpenACC Multicore version of CloverLeaf on the c5.9xlarge instance in the Oregon region is roughly $1.53 per hour x 0.554 hours = $0.85.

So, in this case, running the OpenACC Multicore version of CloverLeaf is slightly cheaper than running the MPI version on the same hardware.

Stop your instance so we can prepare to use a NVIDIA Volta V100 GPU to accelerate CloverLeaf via OpenACC. AWS doesn’t provide access to GPU-enabled instance types by default, so users must first request access. Check the EC2 Service Limits page to see if you have access to p3.2xlarge and p3.8xlarge instance types. If not, submit a request to AWS via the Request limit increase link.

Once again, we need to fix up a few things in the Makefile:

Now invoke the build as follows:

Once the build completes, you should copy the same clover_bm32.in input file as described previously:

You can now run the OpenACC version of CloverLeaf on a single V100 GPU as follows:

A single V100 completes an entire run of this application in just over three minutes:

Now we are going to try a really fun experiment to fully showcase the power of GPU-accelerated computing: we will harness the power of multiple GPUs in parallel to run the same CloverLeaf problem.

For this experiment, you will try using not one, but four V100s GPU to accelerate CloverLeaf via OpenACC. Bring down your p3.2xlarge instance and change the instance type to p3.8xlarge. This instance type provides 32 virtualized CPU cores and four virtualized V100 GPUs. As this is one of the most powerful instance types AWS EC2 offers, its cost is reflected accordingly: Amazon charges around $12 per hour to use a p3.8xlarge instance. Fortunately, you will not be using this one for very long at all.

We will reuse the same GPU-enhanced version of the CloverLeaf source code as in the previous section, so there is no need to download or rebuild it here. Simply change to the CloverLeaf_OpenACC directory and run CloverLeaf as follows:

Once you have the source code, bring up the p3.8xlarge instance and log in as usual. Apply a similar build fix as in Section 6.4 and then build it as follows:

Notice that four GPUs can whiz through this CloverLeaf problem in about a minute:

Not surprisingly, we get a nearly 4x speed-up over the single-GPU experiment. This improved performance mostly makes up for the more expensive multi-GPU instance type, as the cost is roughly the same: $12.24 per hour x 0.0138 hours = $0.17.

Below is a table summarizing all of our results.

Shutting Down Your Instances

One important item that bears repeating is that your instance continues to accrue charges as long as it is running. You should shut down (“stop”) your instances whenever you are not using them to avoid unnecessary fees. To do this, bring up the EC2 Dashboard, find the running instance you need to shut down in the list of instances, right click on it, and select Instance State followed by Stop. Figure 15 below illustrates these steps:

This can take a few minutes, so verify that it has stopped before closing your browser. The EC2 Dashboard should resemble Figure 16 below when your instance has reached the Stopped state:

IMPORTANT NOTE: The default Terminate action means that the instance will be removed, and its associated root storage (EBS volume) will be deleted. Do not change your instance state to Terminate unless you are finished with your instance and wish to delete it.

Using the PGI AMI on AWS, you can access GPU-accelerated computing for very little investment. Using Amazon's EC2 cloud computing platform, we sped up a sample application from running in three and one-half hours on a single-core CPU, to just under a minute using four state-of-the-art NVIDIA Volta V100 GPUs. At the same time, accelerating the application with the GPU resulted in a significant cost savings.