Why should PGI users want to understand the CUDA threading model? Clearly, PGI CUDA Fortran users should want to learn enough to tune their kernels. Programmers using the directive-based PGI Accelerator Compilers with OpenACC will also find it instructive in order to understand and use the compiler feedback (-Minfo messages) indicating which loops were scheduled to run in parallel or vector mode on the GPU; it's also important to know how to tune performance using the loop mapping clauses. So, let's start with an overview of the hardware in today's NVIDIA GPUs. 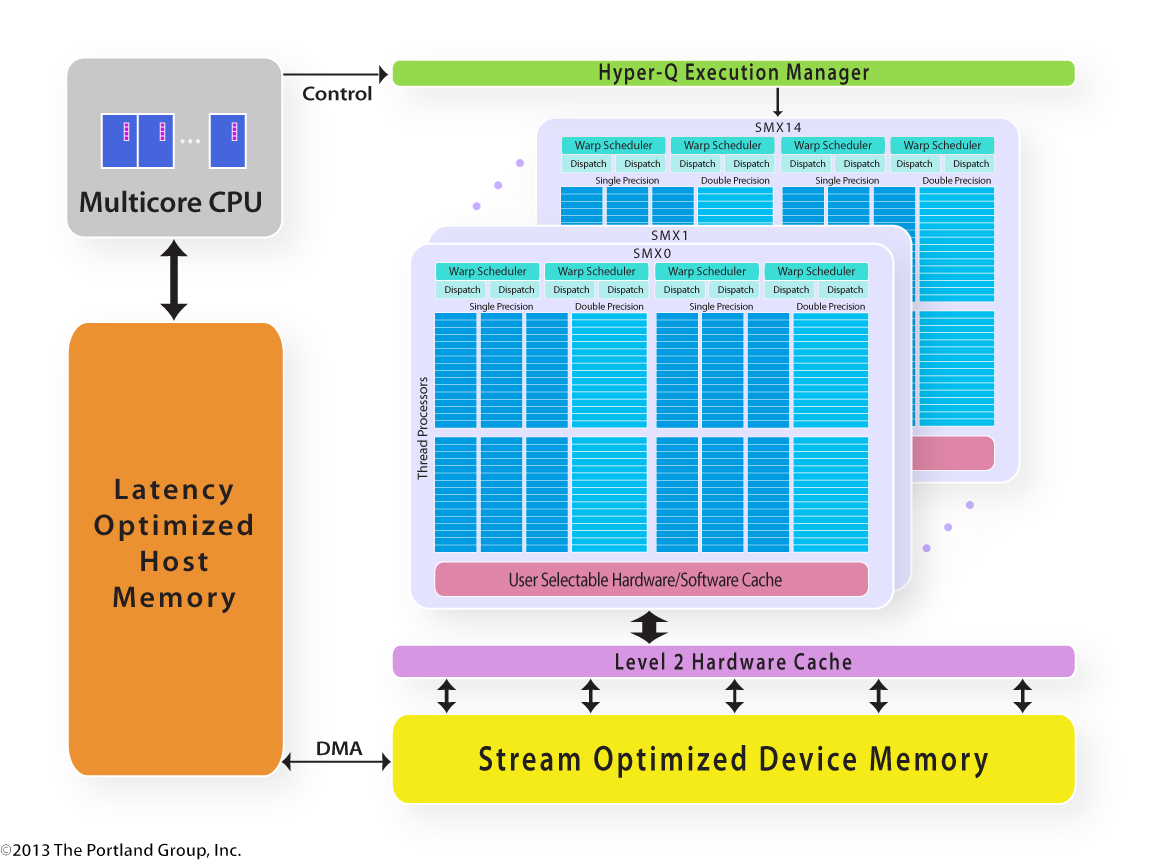 A GPU is connected to a host through a high speed IO bus slot, typically PCI-Express in current high performance systems. The GPU has its own device memory, up to several gigabytes in current configurations. Data is usually transferred between the GPU and host memories using programmed DMA, which operates concurrently with both the host and GPU compute units, though there is some support for direct access to host memory from the GPU under certain restrictions. As a GPU is designed for stream or throughput computing, it does not depend on a deep cache memory hierarchy for memory performance. The device memory supports very high data bandwidth using a wide data path. On NVIDIA GPUs, it's 512-bits wide, allowing sixteen consecutive 32-bit words to be fetched from memory in a single cycle. It also means there is severe effective bandwidth degradation for strided accesses. A stride-two access, for instance, will fetch those 512 bits, but only use half of them, suffering a 50% bandwidth penalty.

NVIDIA GPUs have a number of multiprocessors, each of which executes in parallel with the others. A Kepler multiprocessor has 12 groups of 16 stream processors. I'll use the more common term core to refer to a stream processor. A high-end Kepler has 15 multiprocessors and 2880 cores. Each core can execute a sequential thread, but the cores execute in what NVIDIA calls SIMT (Single Instruction, Multiple Thread) fashion; all cores in the same group execute the same instruction at the same time, much like classical SIMD processors. SIMT handles conditionals somewhat differently than SIMD, though the effect is much the same, where some cores are disabled for conditional operations.

There is also a small software-managed data cache attached to each multiprocessor, shared among the cores; NVIDIA calls this the shared memory. This is a low-latency, high-bandwidth, indexable memory which runs close to register speeds. On Kepler, the shared memory is 64KB. It can be configured to a 48KB software-managed data cache with a 16KB hardware data cache, or 32KB SW cache with 32KB HW cache, or 16KB SW cache and 48KB HW cache.

When the threads in a warp issue a device memory operation, that instruction will take a very long time, perhaps hundreds of clock cycles, due to the long memory latency. Mainstream architectures include a two-level or three-level cache memory hierarchy to reduce the average memory latency, and Kepler does include some hardware caches, but mostly GPUs are designed for stream or throughput computing, where cache memories are ineffective. Instead, GPUs tolerate memory latency by using a high degree of multithreading. A Kepler supports up to 64 active warps on each multiprocessor. When one warp stalls on a memory operation, the multiprocessor control unit selects another ready warp and switches to that one. In this way, the cores can be productive as long as there is enough parallelism to keep them busy.

NVIDIA GPUs are programmed as a sequence of kernels. Typically, each kernel completes execution before the next kernel begins, with an implicit barrier synchronization between kernels. Kepler has support for multiple, independent kernels to execute simultaneously, but many kernels are large enough to fill the entire machine. As mentioned, the multiprocessors execute in parallel, asynchronously. However, GPUs do not support a fully coherent memory model that would allow the multiprocessors to synchronize with each other. Classical parallel programming techniques can't be used here. Threads can spawn more threads on Kepler GPUs, so nested parallelism is supported. However, threads on one multiprocessor can't send results to threads on another multiprocessor; there's no facility for a critical section among all the threads of the whole system.

CUDA offers a data parallel programming model that is supported on NVIDIA GPUs. In this model, the host program launches a sequence of kernels, and those kernels can spawn sub-kernels.

This is the challenge for the CUDA programmer, and for the PGI Accelerator compilers. If you are a CUDA Fortran programmer, we hope this gives you a basic understanding that you can use to tune your kernels and launch configurations for efficient execution.

If you are an OpenACC programmer, this article should help you understand the compiler feedback messages and make efficient use of the loop mapping directives. The OpenACC directives are designed to allow you to write concise, efficient and portable x64+GPU programs. However, writing efficient programs still requires you to understand the target architecture, and how your program is mapped onto the target. The OpenACC directives are designed to reduce the cost of writing simple GPU programs, and to make it much less tedious to write large efficient programs. We hope this article is one step towards that understanding.